The One Anastomosis Gastric Bypass (Omega Loop Gastric Bypass/Mini-gastric Bypass) was conceived by Dr. R. Rutledge in 1997.[1] This type of operation has gained proponents throughout the world, particularly increasing in the past years in Europe and Asia.[2] Several Studies have demonstrated that it is a rapid, safe and effective bariatric operation The operation consists of two components: First, a long and narrow - restrictive lesser-curvature gastricpouch; Second, a 150 to200 cm jejunal bypass with an antecolic gastro-jejunostomy (GJ) anastomosis, which leads to significant(fat-)malabsorption. 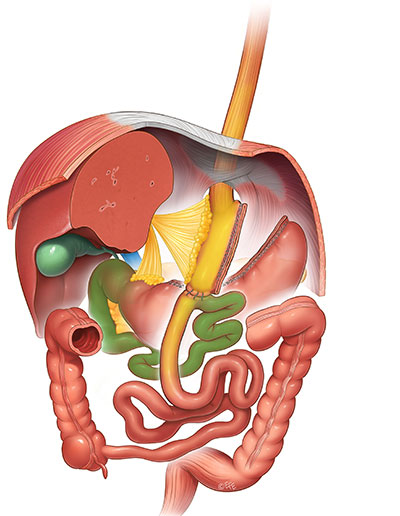 Creation of the Gastric Pouch

The lesser curvature of the stomach is identified at the levelor just distal to the crow’sfoot. Here,the lesser sacisentered and the stomach stapler-divided (not completelytranssected) at a right angle to the lesser curve. An app. 36 Fr bougie is passed down by the anaesthetist, and the stomach is further stapler-divided upwards parallel to the lesser curvature, so creating a narrow, longitudinal gastricpouch. The fundusisexplicitely not part of the pouch.The long and narrow shaped pouch is less pronetodilation because there is no out let narrowing by a stomaorpylorus.

Creation of the Malabsorptive Jejunal Bypass

The omentumisretracted from left to right to enable exact identification of the Duodeno-Jejunal junction (ligamentof Treitz).

The small bowelis run to 200 cm distal to Treitz’ ligament and the nan astomosedantecolic end-to-side to the gastric pouch.

Others vary the length of the bypassed small bowel according to the BMI, with longer by passed small bowel segements in super obese patients.[3 4] Care must be taken to have at least 300cm of small bowel in the food stream to avoid an increased risk of side effects due tomalabsorption.

To minimize possible bilereflux, some surgeons perform additional sutures between the afferent biliopancreaticlimb and the gastric pouch.[5]Clinicially relevant bile refluxis reported in the literature in the lowone-digit percentage range and can be easily corrected by conversion to a Roux en Y gastric bypass or an entero-enterostomy.

Until today there is no evidence that the Single One Anastomosis Gastric Bypass promotes the development of gastric- oresophageal cancer, although this question(due tothe lack oflong-term data) cannot be answered definitely.

The expected weight loss is at least comparable to the Roux en Y Gastric Bypass – orevenbetter (range30-40% Body Weight Loss). The same is true for the resolution of comorbidities, especially Diabetes.[3] Patients after Single Anastomosis Gastric Bypass need(micronutrient) supplementation comparable to that after RYGB,additionally there is a higher risk for iron deficiency and deficiency for fat soluble vitamins. Fatmalabsorptionmay limit the quality of life in few patients especially after a high-fatdiet due tobloating and steatorrhea.

The number of Single One Anastomosis Gastric Bypasses performed world wide is increasing steadily: This procedure has proven to be technically simple, safe and effective, resulting in permanent weightloss, being easily revisable by moving the anastomosis, and if ever necessary, reversable(6).